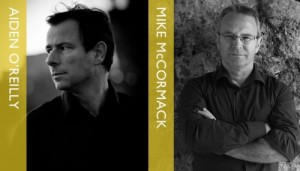 Mike McCormack and myself are teaming up for a mini-tour of London, with two dates signed up at bookshops.
I’m immensely grateful to Anthony Cartwright for playing a key role in instigating the readings. His own fourth novel, Iron Towns, came out in May.

Anthony will be discussing the books with us on the nights:

Mike McCormack is an award-winning novelist and short story writer from Mayo. His previous work includes Getting it in the Head (1995), Notes from a Coma (2005), which was shortlisted for the Irish Book of the Year Award, and Forensic Songs (2012). In 1996 he was awarded the Rooney Prize for Irish Literature and in 2007 he was awarded a Civitella Ranieri Fellowship.
His latest novel Solar Bones came out recently.

Anthony Cartwright has worked in factories, meatpacking plants, pubs and warehouses and with London Underground. His debut novel, The Afterglow won much acclaim – and a Betty Trask Award in 2004. His second novel, Heartland, was published by Tindal Street in May 2009 and praised by Jonathan Coe, David Peace, Catherine O’Flynn and DJ Taylor amongst many others. It was shortlisted for the Commonwealth Writers Prize, and was a Book at Bedtime on BBC Radio 4. How I Killed Margaret Thatcher, a bitter-sweet comic novel that captures the intensity of early 1980s Britain through the eyes of an unusual 9 year old Black Country boy, was published in 2012. His latest novel is Iron Towns.

I owe an immense debt of gratitude to Anthony Cartwright for taking an interest in the book and proposing the readings to bookshops he knows. I don’t know Anthony personally and have never met him, so it all came as a great surprise to receive such a boost out of the blue. I hope to equalise the debt – and I don’t mean by endless FB postings recommending Anthony’s books.
I hope one day to pass on the goodwill and be able to offer a debut writer whose book I have admired (perhaps one that hasn’t a big PR campaign behind it), an unexpected helping hand. 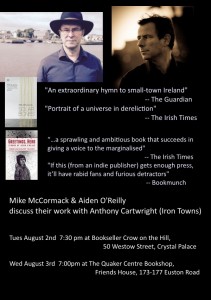 Absolutely thrilled to have received an invitation to the West Cork Literary Festival!!! My spot is on Tuesday, July 19th.

Looking forward to running into lots of newer writers such as Caitriona Lally, Gavin McCrea, Danielle McLaughlin, Tom Morris, Lisa McInerney, Joanna Walsh, and Paul McVeigh plus some of the more established writers such as John Banville, Lia Mills, and Zadie Smith. (Just to pick out a few I’m familiar with, there are lots more on the programme).

“From the outside we speak of ‘characters’ with characteristics more or less fixed. But from the inside there is only the world.”
The first interview about my debut short story collection Greetings Hero. With poet & journalist Joe Horgan.

In this issue of The Honest Ulsterman. 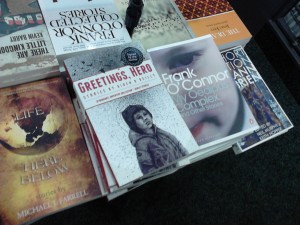 On the table in Hodges Figgis

It’s the only review I’ve gone back to read several times.

An earlier version of this review appeared on Dec 8th 2014. For reasons unknown, The Examiner decided to run it again, and the reviewer apparently revised it.

The characters here are linked by their incredulity towards official narratives; belief in any “central source of validation” is forever beyond their reach.

Big stack of signed copies are on the tables in Hodges Figgis.

A huge thank you to everybody who came to the launch of Greetings Hero on Wed 12th November 2014 in Hodges Figgis. Special thanks to Kevin Barry for coming all the way from Sligo to be guest speaker. Thanks also to Dylan Mc Donough for reading out an extract, putting life into the voices.
Big appreciation to Honest Publishing co-director Dan Marsh for making the trip from London to be there.

A special thanks to Stephen and the staff at Hodges Figgis for supporting the event and keeping the shop open late.

It was a fantastic night, both at Hodges Figgis and in The Duke afterwards for drinks – and I’m not the only one to say so.
This book is well and truly launched now.
[huge_it_gallery id=”2″]

The artist for my cover introduces himself:

Slava Nesterov, young artist and illustrator from Perm, Russia. He has participated in many exhibitions. He considers himself an heir of the school of socialist realism, but has moved away from the canon, and creates graphic works imbued with symbolism and meaning. His work is alert to social issues and portrays the internal contradictions of the human person in a surrealistic manner.

Slava also did the artwork for the previous book from my publisher – Mark SaFranko’s The Suicide.

The story of the cover for my book is long and convoluted – Slava was the third artist to attempt a design. When his name was first touted I looked him up and was delighted to see the fantastic work here.

Initially the publisher sent him some of my stories and he returned sketches. These seemed a bit too literal to me. His artwork online had vision, it was an unsettling blend of the human and inhuman / animate and mechanical. There were already two or three images online which I felt matched my fiction, in ways which I lack the ability to express. The boy with the black crows over his head was one. I asked my publisher if there was any reason we couldn’t use some of his existing images …. and things went from there.
[huge_it_gallery id=”1″]