this is the ritual 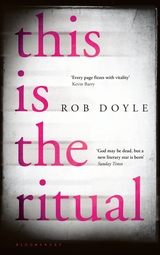 this is the ritual

Bracing and contrary and annoying and intellectually playful and painfully sincere stuff here. It feels great to be able to pick up a book and say “not to everyone’s taste“. So many books bear the Nihil Obstat of palatability for the market.

This collection of short fiction has several biographies of (possibly) fictional writers, bits of possible autobiography where a disreputable character called Rob Doyle appears and fails, Ballard-style eidetic fictions that work like contact prints on the cortex, a meditation on how extreme pornography can get, and a piece on the author’s frenzied attempt to write a reassessment of Nietzsche.

The story No Man’s Land is an archetypal one of a young man facing a dual-natured existential crisis – he informs us at the beginning it was ‘a severe nervous affliction’ but it becomes apparent his crisis taps into a more general malaise of humankind. It’s a brilliant story and shakes up lots of resonances. I don’t know if the ending is supposed to be heart-warming or if it is a hint as to the aetiology of the narrator’s crisis.

“listening as I wandered to formless ambient soundscapes that deepened my sense of being in a place that was beyond the world, and which now outlived it ”  …. Was that music by the North London musician Burial by any chance?

You’ll never have to listen to anyone say: “a lovely book by the lovely Rob Doyle.”