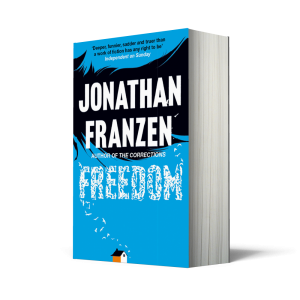 <--- Look at the thickness of that! A huge wide-ranging novel that tracks the Berglund family: Walter, his wife Patty, their son Joey and daughter Jessica. Wide-ranging in the spread of characters and in its time span. Walter's parents and grandparents are given more than ample space, as are Patty's. We read about Walter's grandfather Einar, a stubborn Swede who left his native country when he was displaced as the favourite after his mother had another son in her mid-forties. The family as a structuring principle for a big novel is a very 19th century idea, and one that is out of keeping with the age we live in. Times have changed too rapidly over the past century, the generations have little in common, people are formed more by their education and their career than by their parent's characters. The hallmark of the age is how little coherence there is to an individual's life, let alone the extended timeline of a family. [toggle_content title="" class=""] But Franzen captures all of that discontinuity, the fault lines in contemporary America which run through families. He depicts a sports jock (Patty), a rock musician (Richard), a nature-loving liberal (Walter), a working class Republican mom ... the cast goes on and on. Franzen's speciality is making the connections between the inner intensity of characters and the forces in contention in the huge political/sociological sphere. What young Joey likes about the Republican party, for example, is that it doesn't look down on ordinary people and try to preach better values to them, the way liberals do. The novel was written in the Bush era, and it has a scary despondent feel in the background, like the whole nation (the USA) is in the grip of populist ideologies with no hope for social justice, world peace, or the environment.

There was plenty of tweeting on Twitter, but the chirping and fluttering world of nature, which Walter had invoked as if people were still supposed to care about it, was one anxiety too many.

Parts of the novel drag on too long, but no doubt different readers will have differing opinions on which parts.

It occurs to me that the neutral narrative used to narrate the lives of widely divergent characters presupposes a single neutral perspective. If the Berglund ancestors are described as preferring the solidity of disappointment in life, it presupposes a god’s eye view which can compare them to the norm. The narrative commensense viewpoint is not acknowledged or put into question. There is a feeling in reading this work that the narrator has nothing to learn from these characters, but sets himself the task of depicting them faithfully.

So there’s a lack of inspiration to the novel, a lack of disruption or questioning of values. Yet despite that, it’s a great and ambitious novel – even despite the occasional boilerplate passages attempting to decribe the generic personalities in a middle-class neighbourhood. (And Franzen has it in for the complacent middle classes at times.)

I liked the parts which tie in with the larger movements in history – Joey’s involvement in making big money out of contracts to supply the military in Iraq, Walter’s environmental crusades. Possibly these are the parts which American readers will like the least. But this book gave me an insight for the first time into how extreme conservative politics has become so embedded in the USA.

His last novel The Corrections was more dramatic, with showy twists to it. I loved it more than this one. It’s a strange thing to say, but I have the feeling sometimes that the subtleties of Freedom sometimes go above my head. There is an immense hidden skill in the way facets of characters are revealed in different relationships – Walter<->Richard, Walter<-> his son Joey, even Walter<->his brother Mitch. The essence of what it is to be a person gets lost in these close-up aspects, and we may be left wondering where the true person is, and that the novel’s implicit claim to be a depiction of personalties through time is only in the reader’s mind and the author himself at last relinquishes any such claim.

PS
John Self gives his views on the novel:
http://theasylum.wordpress.com/2010/09/23/jonathan-franzen-freedom/