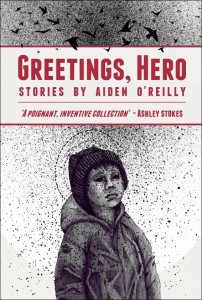 “A startling debut – wit and artistry, spliced to an imagination which has real ambition for the short story.”

— Mike McCormack (Notes from a Coma)

Available in bookshops in Ireland and the UK.
Kennys online bookstore have the lowest price anywhere and they’re Irish

“Aiden O’Reilly’s stories of one-night stands and fraught relationships, of dreamers, drifters and migrant labourers, an academic crank at war with the legacy of the Roman Empire and a man who assembles a woman from a kit suggest complicated truths about who we are now and where we have come from. Greetings, Hero is a poignant, inventive collection by a writer distinguished by a rich and resonant voice.”
— Ashley Stokes (The Syllabus of Errors, editor of the Unthology series)

“The strongest debut collection I have read for some years”
— Quadrapheme

“If this (from an indie publisher) gets enough press, it’ll have rabid fans and furious detractors: we’ll be intrigued to see them slog it out.”
— Bookmunch

“Beautifully imagined and crafted.”
— Sue Leonard in the Irish Examiner

“Aiden O’Reilly is an absolute master at conveying a certain way of life.”
— Bookmunch

“O’Reilly’s very fine debut offer the reader a series of candid dispatches from a changing Europe. It is a volume defined by a sense of unease.”
— Val Nolan in the Irish Examiner

“I was very taken by ‘Human Behaviour’, ‘Three Friends’, ‘Lost and Found’, ‘Unfinished Business’ and ‘Words Spoken’, all of which conjured up recognisable situations and predicaments with such freshness as to make them seem startlingly new.”
— John Boland in The Irish Independent

“… there’s little joy in these tales of human misunderstanding, disingenuousness and indifference, although they are sometimes starkly compelling, and have a visceral immediacy and an authenticity of felt life, albeit grim. They do have an existential temper, but not of the optimistic kind.”
— Geoff Ward, journalist, writer, and Colin Wilson expert (not a review, but a perspective on the collection)

“…a sprawling and ambitious book that succeeds in giving a voice to the marginalised. The author lays bare these characters as they wander their lonely worlds, braving the elements.”
— The Irish Times

“O’Reilly’s voice is strong, his vision is remarkably clear, and the stories are dotted with beautiful turns of phrase.”
— Totally Dublin

“Aiden O’Reilly is almost faultless in his presenting of a certain way of life much of the world has probably encountered, in one way or another, but may never have paid much attention to … a brilliant debut for Aiden O’Reilly.”
— The Indiependent

“for days afterwards I felt like I was seeing things differently, as if I’d been granted another way of looking at the country around me … A really quite wonderful book.”
— Joe Horgan

“Overall I found the tone of the book to be dark but that’s also a testament to the power of O’Reilly’s writing. For a first collection O’Reilly has a style that it feels like he has been honing for some time.”
— Helen O’Leary in No More Workhorse

“O’Reilly’s first collection is a startling interrogation of the modern world; his subjects are globalised and question the essentials of humanity itself, his fiction skipping between naturalism, the fantastic and science fiction. With his deliberate provocations, O’Reilly will be keenly discussed if enough people read him (which they really should).”
— Interview for tn2 magazine

“I was immediately taken with it, with the freshness of voice and the territory it explored. It really brought to my mind Breece D’J Pancake’s amazing work and I can assure you that is high praise. Why short stories, though? Why that particular form?”
— Interview for The Honest Ulsterman

One of the stories previously appeared in Unthology 4, where the reviewer singled it out for special mention:
Finally, The Laundry Key Complex by Aiden O’Reilly goes deeper in its attempt to analyse the human condition, using residents’ misuse of the system of signing out the key for the laundry room in a student dormitory building as an indicator of a malaise in our social structures and attitudes. There is something almost Selfian in the way O’Reilly psychoanalyses wider cultural problems through a seemingly absurd microcosm, making this one of the most satisfying stories in Unthology.

Another story was given a mention by Derek Hand in his review of These Are Our Lives, an anthology from The Stinging Fly Press:
In Words Spoken Aiden O’Reilly brilliantly offers the reader a story of contemporary Dublin and the ordinary choices made in order to simply get by and survive.

Des Kenny at Kennys bookstore chose the book for their recommendations to international book clubs.

Acknowledgements
Some of these stories or earlier versions have previously been published in The Stinging Fly, The Dublin Review, Unthology 4, Prairie Schooner, Ulster Tatler, and 3am magazine.