A fascinating debut novel I had the pleasure to review for The Dublin Review of books.

Speculative novels from Ireland are as rare as hens’ teeth, despite the towering examples bequeathed to us by Jonathan Swift and Flann O’Brien. In more recent decades we have Mike McCormack’s fictions, and a YA novel by Sarah Maria Griffin. That’s about it as regards novels that meet Margaret Atwood’s tighter definition of speculative fiction as extrapolating the latent possibilities of current trends.

So I was immediately hooked when I heard of the premise of Bourke’s novel: a line of people queuing for generations, not sure what they are waiting for, but utterly convinced of the importance of keeping one’s place in the line. And ready to torture those who transgress.

The book twists between adventure and satire and existential questions – it’s Waiting for Godot crossed with Gulliver’s Travels. Seriously, that fits best.

Not surprising that it’s from Tramp Press. They brought out A Brilliant Void a couple of years ago – a collection of classic science fiction from Ireland. It’s like a window into a different era. There was a time when Ireland – or Dublin at least – was home to several sci-fi and horror writers: Dorothy McArdle, James Fitz-Maurice O’Brien, Jane Barlow, and many others.

I’ve been looking forward to Elaine Chiew’s collection of short stories for a couple of years ever since I read a few in the Unthology anthology brought out by Unthank Press. Elaine is ethnic Chinese from Malaysia, educated in the USA and now lives in the UK. A very modern spread of identities.

Well at last it’s here and I pitched a review to Litro Magazine.

I was attracted to Chiew’s writing by its sheer brilliance and by how it captures the giddy sense of living in a world where everyone is guessing the rules. As I mention in the review, one takeaway point from the stories is that the clash between the older generation’s values and the newer is greater than east-west divide.

Practicing editing techniques will be a crucial component and some of the mechanics of dialogue, description, and POV will be covered.  The course is suitable for those who have attempted some writing and for those in need of a new approach. Participants will be expected to complete two pieces of fiction or creative non-fiction.

At the Irish Writers Centre on Parnell Square

I see Rob Doyle has a regular column in the Irish Times where he introduces his best-loved books.

Doyle is the author of Here Are the Young Men and the short story collection this is the ritual – link is to to a few notes I made on it. His fictions generally zoom in on the anxieties, manias and apostates of these strange days we live in.

Here’s a list of the columns so far. There are a couple of my own favourites in there too.
And below is how he introduces the series

I read for delight and fascination, even when these demand a toll, opening old wounds or inflicting new ones. The books I’m going to recommend are eclectic. What they’ve got in common, aside from the fact that they were written prior to the 21st century, is that they have all made this human lifespan I find myself undergoing deeper, stranger, grander, and full of amazement. 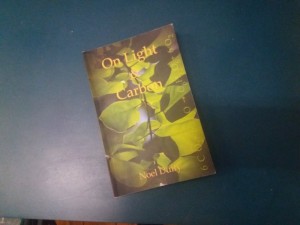 There was a time in my teenage years when I read lots of popular science books: Carl Sagan, Jacob Bronowski, Arthur Koestler, Douglas Hofstadter, the Tell me Why book series and others. The emphasis in these books was on how science opens up new ways of understanding. I grew up in the belief science was a human concern – and I don’t mean in terms of the impact of technology. I mean I expected that discoveries about human nature and about the nature of the universe would change people’s way of thinking.

Noel Duffy trained as a physicist and shares this view that scientific discoveries are an integral part of intellectual life. There is no border between the “two cultures”. His poems grasp imagery from space exploration, chemistry, astronomy, the pioneering days of science, but also ancient history, art, and philosophy.

If this perspective is uncommon it's largely because of how universities operate, how people have to specialize in life.

Duffy's poems resonate with me and revive that once-familiar image of man as a creature driven by the pursuit of knowledge and search for essential truths. The very first poem, Earthrise, is about an astronaut returning from one of the Apollo missions.

Several of the poems juxtapose the intellectual passion with the mundane, the domestic, and the chaotic. They bear witness to a world fast losing an appreciation for Mind/Spirit/Intellect – and do so in surprising and intriguing ways. We meet a professor 'in sloppy collegiate tweed' pressing a tea-bag against the side of the cup, who then squeezes past 'a sharp-tongued student holding court / on Derrida and the deconstruction of art'
(No prizes for guessing what the poet thinks of postmodern philosophy.)
Another poem looks at the invention of the microscope a kind of counterpart poem to Earthrise which begins the book. This time the new worlds opened up to human sight are the infinitesimally small. Duffy makes an imaginative leap:

“But in this I saw not just matter alone, but another light also
that penetrates further to the very notion of order,
beneath the base of the world and all we perceive

Duffy's poems, by and large, are not in the business of highlighting the absurdity of existence, fragility of reason, fragmented identity. Instead his poems reach out to a broader understanding of what it is to be human. Broader in the sense of including thirst for knowledge, encounters with the transcendent, and also in an expanded grasp of time and location.

It was the late 70s, time of cutbacks
and strikes, the dole queue never far
from mind. One morning on a picket line,
my dad got talking to a labourer from the depot
who had read The Illiad and was a respected
amateur antiquarian.

The sequence of poems which includes the lines above is a powerful and illuminating part of the collection. It's composed of memories of his father and the labourer from the depot, called PJ. This PJ is a lover of wisdom and artist. The poems in this section convey a thirst for knowledge and understanding, for the Logos of the Greeks. It is a real thirst, there among the other impulses and desires of daily life of ordinary people (i.e. working class).

Here's another few opening lines that are as good as any to illustrate Duffy's clarity and sense of place.

Things had gone wrong. I was a young man
lost, my mind struggling with the impossible
questions. I travelled alone by train to a place
by the sea where tall houses lined the seafront,
tall windows taking in the prospect.

Duffy tends to keep his language and rhythms pellucid, the knottiness and twists of these poems are in the meanings and situations presented. Some of these poems are close to flash fiction – I don't mean this detracts from them in any way.

Nietzsche and others viewed creativity as emerging from a Dionysian/Apollonian dialect. The Dionysian represents the visceral life-force, passions, intoxication. The Apollonian represents the search for truth, overcoming one's nature, light rather than heat, construction not destruction, a grasp of the extended self rather than immersion in the moment.

Duffy's poetry is Apollonian, refreshingly so. Rooted in his own life (including intellectual life), and not driven by what the news headlines proclaim are the pressing issues of the day.

I'll leave off with this verse from a poem called “The Older Artist” (presumably not a hugely successful one).

As I looked at one piece he came
and stood beside me in silence for a time,
then turned to me and gripped my arm fiercely,
saying, 'Somehow it all matters. It has to.
It fucking has to, doesn't it?'