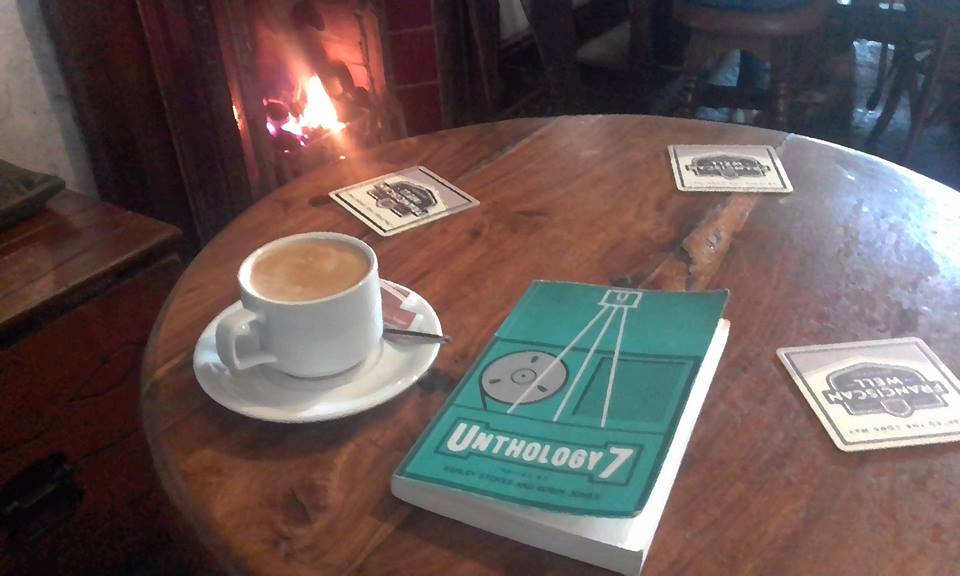 I love the Unthology series of extraordinary new fiction, a sort of “best of” without deferring to established reputations – often a fatal weakness in state-of-the-art anthologies.
Fight them? Astonish Us is how the editors introduce this current incarnation. “We considered interviewing ourselves in twee and mimsy fashion … We thought hard about whether to use this introduction to provide an august and lofty survey of something called the State of the Short Story, or use it to tell you that we’re so middle class that we need no introduction.”

Fight them? Astonish Us

The people behind Unthology have a broad tolerance for different styles and aims in fiction. And so there may well be horror stories alongside experimental fiction. Generally a predilection for fiction that makes you think, rather than the whole beautiful-prose gig.

I’ll give the verdict straight off: I think this is probably the best anthology I’ve read,

including all those ‘best new’ anthologies that come out every couple of years. There are just so many standout stories here: at least five that I’ve read twice. And as a whole the anthology conveys a distinct This-Is-England statement, though this was probably not what guided the selection for the book – one story is set in Barcelona and another in Yugoslavia.
Now I don’t know if it’s just me, but I think Unthology 7 is the best of those I’ve read. Number 8 is out since then, and I’ll probably get round to reading it in, oh, a couple of years. I was never the cool kid who knew all the latest bands. No rush, the unthologies will stand the test of time. Some day they’re gonna be a boxed set with embossed covers and edge gilding and tassels. That’ll be a boring day.

Barney Walsh’s tale is a sort of love story among the gutters of heroin addiction. It’s an enquiry into the nature of deviance with a nod to Clockwork Orange, and all round just a thumping great story that bravely veers into, well, the realms of bad taste. It’s my personal favourite in the book.

David Martin’s Spiders is set in an office on the 23rd floor. “It is dark beyond the glass, the city a sea of orange sodium light, refracted in the overcast. Rhys is at his desk, virtually alone here.” The data he deals powers the world outside in oblique ways. The company he works for used to be a spin-off from some entity that was originally a bank. Now they are downsizing after the financial crash and each month more employees are called in for their final notice. In his many moments of distraction, Rhys pauses to observe the colony of spiders who are thriving in a sheltered spot outside the plate glass.
It’s a wonderfully creepy story, a seamless meld of realism and allegory, set firmly in the 21st century.

The story right next in the book is also set smack-bang in corporate-employee post-crash England. The Hollow Shore, by Gary Budden. You might read reams about England’s lost heritage, and how retail chains have levelled High Streets to a single ahistorical non-contiguous space. But you need to read this story to get a feel for how eerie and alienating this can be. Simon has made a bit of a mess of his life, could no longer afford his flat in London, and returns to live with his parents in small town England. The parents are actually happy to see their son, and together they go for a Sunday dinner to a pub. Simon asks his father why they had chosen a chain pub instead of some lovely old place in the real town centre.

My father looked up from his paper. “We like it here.” For the first time that day, he smiled.

Maybe it’s just me, but I found that scene weirdly uncanny. It was also uncanny that back in his home town there is a life waiting for him to pick up again – old friends to meet, an ex-girlfriend to hook up with again. All this eeriness coalesces towards the end. I don’t know why this story works so well, but it’d be my choice for the best in the book and the best I’ve read in a long time.

Charlie Hill’s On the truth and lies of the love story has a neat structure: two columns, the left is a man’s telephone chat with an unheard friend; the right side is a woman’s chat, likewise with an unheard interlocutor. The man tells his buddy about how easy-going and cool his new girlfriend is, the woman’s conversation – set just a couple of weeks later – tells about how she rushed into things and the moment she realised things wouldn’t work out.
This story is a real coffee-break treat, with instantly recognisable situations and conversation patter. It’s short, funny, and very memorable.
https://storgy.com/2016/09/23/charlie-hill-franks-american-dream/

John D. Rutter’s is a topical story about an occasional journalist/blogger who inadvertently starts a rumour train that the famous entertainer B is a sex abuser. He is then surprised when a whole string of victims pop up with allegations, so it turns out B really is in fact a pervert. Or is he?
Fun to mull over as a piece of pure fiction, but the real-world correlates have generated a lot of heated debate.

Roisin O’Donnell’s story is a fictional portrayal of the Barcelona architect Gaudi. You really have to have courage to take on a historical figure in a short story, and O’Donnell gets inside Gaudi’s religious perspective. Her debut short story collection Wild Quiet came out a few months ago here in Ireland.

The Unthology editors have always shown a high tolerance for concept stories – the kind that runs with an idea and is not too concerned with the whole authenticity and slice-of-life rubrics. That suits me just fine. Dan Powell’s Free Hardcore was fun to read – it helps to know that hard core is the word for rubble and stone used to line a foundation trench.
Another story begins “I died last month. Didn’t have time to say goodbye.” (Roelof Bakker’s Green) I knew I was in for a treat. I enjoyed the translucent prose in this one, but felt I was missing something, as the story seemed a bit slight.

Elaine Chiew’s Chinese Pygmalion bowled me over. It’s a densely textured account of a 15-year old boy and his 9-year old girl cousin thrown together by family tragedy. Young Simon is struggling with the whole puberty thing and making dubious friendships online, while little Elly is a whole textbook case of weirdness.
“Elly whispers shiso-shiso-shiso along the corridors. She watches me sleep at night with owl-eyes. She stares at her eggs for breakfast and says that the yolks are trembling with fear. Music gives her mountain pectorals and marmalade is a place of alien skid” The mentions of uber-eclectic bands and musical styles , teen argot, London locations, and Elly’s own crazy idiolect make this piece a touch opaque, leaving the reader a bit of a teen himself, in awe of a world more complex and cooler than he is. – But I mean this as praise.

Open Windows by Debz Hobbs-Wyatt is set right now, the Facebook era, featuring a group of thirty-something friends who call themselves ‘adults’ in quotation marks. They are ex-friends to be precise, who have all gone their separate ways since the days of graffiti forays. One of their number, Adam, has died. They had kept in a sort of zombie-contact with him on Facebook, occasionally acknowledging his posts, but ignoring his invites. Adam had had an accident when he was 13 which had left him wheelchair-bound. He had stayed mainly in his room, inventing superhero characters, writing on Post-its, and clicking around on social media. His nan tells the friends that Adam always felt connected to them because of Facebook.
The prose and style of the story is jaunty, and yet a real existential nothingness seeps through. The lives of these people seem so slight, they have only irony to cope with the death of their friend. Tracy has become a spiritual medium, but it’s more of a hobby she doesn’t truly believe in. At one point she attempts to say something profound, and another of the friends tells her to “sod off”. Adam seems to have spent his whole life on superhero stuff and 80s bands, and they struggle to find anything to say about him. “Maybe we could all have been a bit more like Adam,” says one friend. “I left John because he was too serious.”
I am not sure to what extent the author intended this story to be unsettling – there’s an apt quotation from Peter Pan, the loveable boy who never grew up.

Ken Edwards’ Infinity is mercifully short. It’s not fiction, but a playing around with the notion of narrative. “And they all gather in that room and they talk and remark upon the room whether it’s a good room or not and they remember another room was that as good a room as the room that is the rom they’re in or wasn’t it perhaps it wasn’t or perhaps it was another room they were thinking of.”
I understood it as a stark demonstration of the arbitrariness of attachment to the world and to a specific era. It’s a very visual piece that stretches the brain muscles in unusual ways. It’s so off the beaten track, hypnotic and allusive – I was very curious what other stuff Edwards has out, and I see he has a new novel Country Life out just a few months ago. https://tearsinthefence.com/2016/02/16/country-life-by-ken-edwards-unthank-books/

I loved the prose of Elizabeth Baines’ Looking for the Castle.

”When the lover reached for his cigarettes, he had a way of doing it, dropping his arm in a curve, that made you think of someone drowning. He would light up and breathe, and his eyes would bruise sideways out of the present into the past.”

The narrator is chasing down childhood memories, growing anxious that they don’t fit into the current landscape, and it’s just perfectly written.