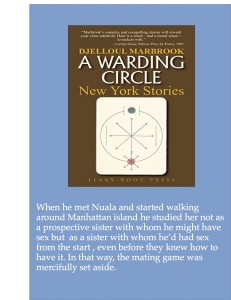 A novella and eight short stories.

Marbrook has had two careers: first with the navy, and then decades as a newspaperman, working as journalist and sub-editor with papers such as the Baltimore Sun. His website and his Facebook posts often cast a critical eye on the media and its collusions and laziness. He has had three poetry collections published and four novels.

In the title story – long enough to be called a novella – a young woman, Artemisia, lies in hospital recovering from being struck by lightning while on a hike. She’s a fast-talking ebullient charmer, but seems to have total amnesia. Not even a memory of her own name. So she deduces what kind of person she must be by observing how she thinks and how she talks; her own wit constantly surprises her. It’s a fascinating conceit – we learn who we really are through our interactions with others.

She quickly strikes up a bond with the nurse Sister Claudine, who perceives that Artemisia is an exceptionally gifted person. But Artemesia’s visionary insights and wild way of talking make the nurse concerned that the young women will get sectioned : “You mustn’t talk like that. I mean, the words are just fine, but you sound ratty-tat-tat.” Artemesia seems to have been re-wired by the lightning bolt: she talks of being raped by a god. Her perceptions of others’ thoughts seem preternaturally keen. She doesn’t know what kind of person she was before, but she seems sure she has been animated. Sister Claudine herself is a person with a broad spiritual openness who is familiar with the reductive categories of medical science, but aware of how limited they are. The two make a connection, with Claudine taking the role of guide to bring her back to common-sense reality and a discharge from the hospital. “You don’t want to give the psych people an excuse to detain you.”

A summary of the plot doesn’t get across what’s unique about this story. The density and texture of the writing is astonishing. This is a long way from minimalism. A long way from a reductive perspective of humanity. All senses are alert, associations are sparked to past events, memories of childhood intrude. This is how we first encounter Nuala, the curator of a modern art gallery and the first discoverer of Artemisia’s talent.
Nuala Gwilt, terrorist-in-chief of postmodern art by virtue of a genocidal tongue, gemmy if androgynous looks, and a curatorial knack for razzmatazzing museum benefactors, repeated this curse before her morning ablutions for two weeks, more or less, until lightning struck, so to speak.

Marbrook’s characters have a depth and subtlety that make them seem more than merely human. They are big souled, capable of extraordinary flashes of intuition or acts of generosity. They may be vindictive but they are never petty.

Marbrook has set himself the nigh-impossible task of delineating a character – Artemisia – who is beautiful, a gifted artist, and a self-less personality. He makes her real, brings the goddess to earth so to speak, but not down to earth. She moves through the avaricious and publicity-obsessed New York art world without being tainted by it. Most writers seem to have a general project of demonstrating that high ideals founder, elevated motivations can be pared away to reveal the familiar drives, etcetera. Marbrook’s fiction seems to extend rather than reduce our concept of human nature: there is more to us than we think, we are greater than we suppose.

The story Ootwaert’s Hoe displays the same imaginative ambition. An artist begins to sketch the faces of the long-dead in a graveyard. Later he looks up old newspapers in the local library and finds his portraits are true to life. It’s not the uncanny aspect which is in focus here, but the depth and intensity of characters which emerge from oblivion. Marbrook’s writing in this piece captures the intensely visual grip an artist has on the world. The main protagonist, Bo, is an artist not just when he is painting, but every time he looks about him. And night after night he returns to the cemetery to paint the dead.