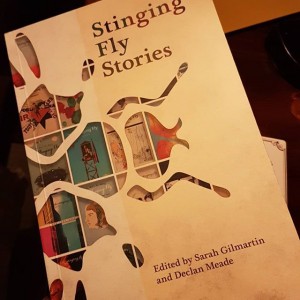 The ‘stinging fly’ of the title is an allusion to a passage in Socrates’ defence speech in court where he was charged with impiety.

” I was attached to this city by the god — though it seems a ridiculous thing to say — as upon a great and noble horse which was somewhat sluggish because of its size and needed to be stirred up by a kind of gadfly. It is to fulfill some such function that I believe the god has placed me in the city. I never cease to rouse each and every one of you, to persuade and reproach you all day long and everywhere I find myself in your company.”

In practice Socrates would often act faux-naif, asking childishly simple questions or praising the superior wisdom of his interlocuter only to dismantle all his unquestioned assumptions.
In the Euthyphro dialogue for example, Socrates questions Euthyphro on what justice is, how we can recognise what is just. In the course of the conversation Socrates successively dismisses all the definitions of justice proposed, beginning with ‘what is dear to the gods is just and pious’.
Their conversation ends abruptly with Euthyphro escaping:

EUTHYPHRO: Some other time, Socrates, for I am in a hurry now, and it is time for me to go
SOCRATES: What a thing to do, my friend! By going you have cast me down from a great hope I had, that I would learn from you the nature of the pious and the impious and so escape Meletus’ indictment by showing him that I had acquired wisdom in divine matters from Euthyphro, and my ignorance would no longer cause me to be careless and inventive about such things, and that I would be better for the rest of my life.

See what he’s doing there?
Socrates must have been an intolerable pain in the ass. Always at the same agenda, always the fake modesty, and his supposed concern with Truth with a capital T.

We can imagine Euthyphro grimacing as he leaves. But he will soon brighten up.

The hallmark of a stinging fly is that sources of power try to ignore it and denigrate it and at last treat it with begrudging respect.